Saturday, 19 October 2013 was not only a warm autumn day in Oxford, but also a highlight in the history of the International Conference for Patristic Studies, at the University of Oxford. Over 40 people gathered to listen to papers related to the history of the Conference and the publishing of Studia Patristica, given, after a welcome by Chairwoman Professor Gillian Clark (Bristol) by former director Professor Frances Young (Birmingham), Director Dr Mark Edwards, Mr. Peeters (Peeters Publishers, Leuven) and myself.

Here follows my own contribution which, together with the other papers will be published soon in Studia Patristica: 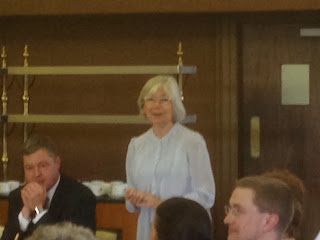 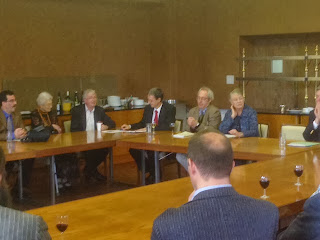 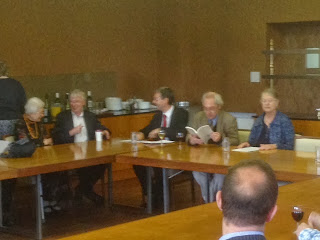 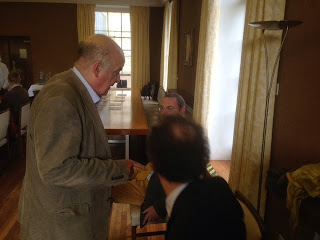 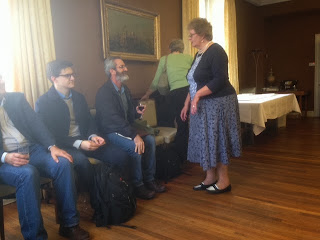 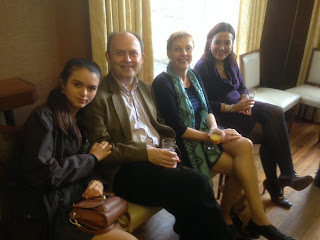 
Editing is a form of asceticism, detachment and humility. It means receiving papers that each time teach you the breadth and depth of what you as editor one does not yet know, should have looked up and could have remembered or read about. Reading unpublished research is an invitation to an enormous learning curve and, therefore, the best training course one can get. At the same time, it carries the responsibility to read critically, to discern between sound ideas, innovative perspectives or, sometimes, hardly sustainable claims, and still to try to get into the mind of the author, even if the proposed article is not yet in its final form and shape. Getting back to authors with questions, notes and suggestions is the striking of a balance between being an interested reader, but not an interlocutor with a vested research interest of one’s own. I am not sure whether I always get this balance right, but editing is certainly a fascinating and one of the most rewarding of academic tasks that one can do.


Who dares to edit Studia Patristica has to acknowledge the vision, the achievements, and the work of the founders of both the Oxford International Conference on Patristic Studies and the first editors of the series of its proceedings: Studia Patristica. As Elizabeth Livingstone reports in her contribution to our volume on ‘Former Directors’, F.L. Cross (1900-1968),[1] the then Lady Margaret Professor of Divinity in the University of Oxford and Canon of Christ Church since 1944, was able to get Professor Kurt Aland to sign as co-editor for the very first two volumes of Studia Patristica, the first of which appeared in 1955, four years after the first conference had been held. Both scholars have been, are still, and, as far as can be projected, will remain programmatic for the entire series. First, because they both represent the post-war endeavour to re-build bridges between the continent and the British Isles, between East and West, within Europe and beyond, between Anglicanism, Protestantism (in all its variations), Catholicism and Orthodoxy, between academics, clerics, independent scholars and people interested in patristics - let me call them lay scholars.


Yet, there is another bridge that both Cross and Aland represent and which has been core to the Conference and to Studia Patristica, namely its interdisciplinarity. Cross, who studied philosophy and theology at Oxford, Marburg and Freiburg, must have been so impressed by one of his academic teachers at Freiburg that he decided to write his philosophical doctorate on him, the Jewish philosopher Edmund Husserl. When he defended his thesis in Oxford in 1930, Cross could not know, of course, that another pupil of Husserl, namely Martin Heidegger, would during the Nazi period become crucial, as rector of Freiburg University, to make Husserl redundand and lose his academic position. Cross’ interdisciplinarity was not only a combination of Theology and Philosophy, but also that between New Testament Studies and Patristics. Before organizing the First International Conference on Patristic Studies Oxford, he had already organised international New Testament congresses. In this he was like Kurt Aland, the scholar who took over from Eberhard Nestle the publication of the critical edition of the Greek New Testament and founder of the famous Marburg Institute for New Testament text studies (now directed by Professor Holger Strutwolf, a co-student of Professor Martin Ritter, Heidelberg) who wrote important studies also on early Christian topics. Cross and Aland remind us of the fact pointed out by the late Martin Hengel, in his ‘A Young Theological Discipline in Crisis’,[2] where he noted that as a discrete discipline, ‘“New Testament Studies” was still a young discipline. This subject has only had its own chairs since the last third of the nineteenth century’.[3] And in his inaugural lecture of 1999, Larry Hurtado had pointed out that most contributions to NT studies, well into the early 20th century, ‘were by scholars in OT, Systematic Theology’,[4] and, as Hengel remarked, ‘above all church historians’.[5] To underline the interdisciplinarity of Patristics, I could also add the history of my own chair at King’s, where the Professor of Ecclesiastical History in the 1920, Claude Jenkins, also lectured on Patristic Texts and when, in 1930, Randolph Vincent Greenwood Tasker lectured on Patristic Texts, who had already been Lecturer in Exegesis of the New Testament, a combined job which he maintained even after WWII when Tasker was promoted to Professor in both fields, as did Professor Robert Victor Sellers who in 1948 became Professor of both Biblical and Historical Theology.


One of the latest innovations in editing Studia Patristica has to do with our book launch today – the introduction of smaller special thematic volumes, this time nine volumes (one is to follow on Lactantius), namely on ‘Former Directors’, ‘Biblical Quotations in Patristic Texts’, ‘Early Monasticism and Classical Paideia’, ‘Rediscovering Origen’, ‘Evagrius Ponticus on Contemplation’, ‘Neoplatonism and Patristics’, ‘Early Christian Iconographies’, ‘New Perspectives on Late Antique Spectacula’, ‘The Holy Spirit and Divine Inspiration in Augustine’. This novelty was the logical consequence of the director’s more rigorous designing, planning, receiving and mapping of international thematic workshops – entailing longer, more specific and more detailed papers which in the past were mostly restricted to plenary lectures and had often been published outside Studia Patristica. To have given those workshops the publishing platform within Studia Patristica in co-editorship with the conveners of these workshops has provided the series with a substantial increase in shared responsibility within the scholarly community, a breadth of themes, interdisciplinarity and a higher number of volumes. In addition, a number of workshops, the contributions of which did not account for a full special volume, entered the other volumes still with co-editors, introductions and even responses to articles, as in the case of ‘Tertullian and Rhetoric’, edited by Willemien Otten as part of Studia Patristica 65 (vol. 13 of this year’s series).


When at the conference of 1997, I was asked to give a paper on the last day of the conference, parallel to Archbishop Rowan Williams’ lecture, I gladly accepted, not to aspire to be a competitor to my parallel speaker, but to reflect about the nature of our conference. In this unpublished paper on ‘Postcolonial Patristics’ I noticed the then still eurocentric-american presence and the lack of postcolonial, gender-, socio-anthropological, literary and reception studies at the conference, compared to the growth of Patristics around the Pacific rim, in Asia, Africa and Latin America. And although we are still far from mirroring these new trends, we are thankful that scholars from all continents have joined us and that workshops like ‘Patristic Studies in Latin America’, ‘Foucault and the Practice of Patristics’, and ‘The Genres of Late Antique Literature’ have found special entries in Studia Patristica 62 (vol. 10 of this year’s series), and that the section ‘Nachleben’ in Studia Patristica 69 (vol. 17 of this year’s series) opens with a paper from Argentinia. Despite all these novelties, the old roots are not neglected – especially the international presence of languages other than English. As a non-native speaker myself, I know the familiarity that a congress breathes when papers are given in German, as others will feel when they can speak or listen to French, Italian or Spanish. With about 10% of all articles in this year’s series being non-English, we are not disappointed, but can surely encourage more colleagues to give their papers and submit their publications in languages other than English.


A word of thanks at the end – without students, colleagues, speakers and authors, without past and present fellow directors the latter being also peer reviewers, without the tremendous work behind and at the scenes of the conference organizing company, especially Priscilla Frost, the Publishers, especially Mr. Peeters and Dr. Bert Verrept, and the support of the faculty of Theology and Religious Studies in the University of Oxford with all its colleges, and our own institutions, but most of all, without our families and friends who contribute, encourage and stimulate our research, we would not be here today, celebrating the achievement of the past and look forward into a bright future of Patristic Studies here at Oxford and beyond. Thank you.

Posted by Professor Markus Vinzent at 01:10 No comments: